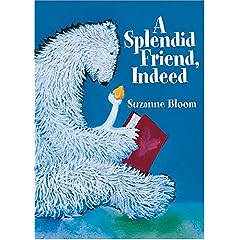 As a mother who likes to read and write and think (the beleaguered polar bear’s interrupted activities), this book is wonderful means of conveying both my frustration at being interrupted and the value still attached to my relationship with the interrupter.

I found it a couple years ago, but it was just this year that I saw its perfectness for our house and bought it for Elisha’s 3rd birthday.  The goose is oblivious to the polar bear’s expressions of frustration, but my girls have noticed them and we are able to talk about things like polite interrupting and interpreting body language.

This was the answer for my (mentioned) desire for a wicked-witch story.

Hansel and Gretel will eventually be one, but I want to wait on that, being very careful about the stories I introduce to my children (and their timing).

For any newbies (or for a refresher) here is the progression I’m trying to use when teaching my children about evil:

This last step is something I’m waiting another two or three years for.  In the meantime, Heckedy Peg emphasizes some good things.

For this stage the power and action of the mother is the most important. Most picture books and stories emphasize the autonomy and discoveries of the child(ren), but in this case the goal is not to put the onus on the child to do the saving.

It is utterly appropriate for children to depend on their mother for saving, and that natural expectation is fulfilled, reinforcing the security of the children snuggled in and listening.

Thinking in these terms now I see this is what I saw in Wiley and the Hairy Man, which I would place between Heckedy Peg and H&G in my progression: Wiley has to deal with the Hairy Man himself, but he also has the advice of his far-sighted mother to guide him and herself to (later) protect him.

No clever conclusion here, just the observation that these two books have been very useful beyond simply entertaining my kids.  It’s books like these that I love to discover.