This is the kind of mother I am: when I find something interesting, I want to share it with my kids.

In the same way, if my kids ask a question, I’m going to want to answer it.

There is a story (well-know in my former circles) of Corrie ten Boom when she was a child. She asked her father was sex is, and instead of answering he suggested little Corrie carry his work bag. She was proud to try, but it was too heavy for her young self, and Dad said something along the lines of, “That answer is also too heavy for you right now, let me carry it until you are older.”

I am always caught off-guard when I hear this story, because I both think it’s brilliant (I think most parents of any era would be looking for a way out of that conversation, and this was so gentle and respectful), and I think, What a missed opportunity.

For years now I’ve been reading my kids my favorite stories. Reading to them, because a lot of my favorite stories contain elements I’ll edit out as I read (often sex, subtext, or violence). Things that I am happy to let my kids wait to discover. These tend to be part of the larger cultural experience of being human, but an adult human, so I filter.

(And I expect I’ll talk more about these books in future.)

This summer I took up reading and writing reviews for Net Galley. It feeds my acquisitive nature and inquiring mind.

And if the books are interesting, I share with whoever’s handy. For example, one of the first books I read and reviewed was Randomistas, by Andrew Leigh. I got into it because it was about so. much. different. stuff. (The common thread being how those things were studied and measured: randomized trials.)

Leigh opens his book with a vivid section on scurvy.

Scurvy was something I knew about the way the average person knows about… let’s say tides. High tides and low tides exist, and they come at certain intervals and have these vaguely specific effects on certain professions. So: enough that a passing reference in a story usually makes sense, but nothing in depth or actually descriptive. [If you are someone who as read even one article or talked with someone who’s explained them to you, yes, you know more that me.]

The author describes the results of ships overrun with scurvy (“Few men having the strength to work, some of the warships crashed into the rocks off South America. … Some of the sailors drowned because they were too weak to swim toward shore.”).

Then I saw the answer to the question I hadn’t noticed I never asked: “Scurvy affects –”

Seriously, how hard is it to restrict one’s wandering to the kitchen and dining room while eating?

“You want to hear something interesting? I never knew this before.” I still didn’t know it then, but I was interested, and they were looped in by the invitation, and maybe it being new to me. I proceeded to read aloud, with minor apologies at certain points that I’d brought this up while we were all eating…

“Scurvy affects the body’s connective tissues. At first, victims feel tired and uncoordinated. They bruise easily and their legs begin to swell. Then their gums become inflamed, their breath grows fowl and their sin becomes blotchy. Sailors were shocked to see old battle wounds beginning to bleed and bones that had healed separating again.”

I offered to stop when they stopped eating, but clambering cries of “You can’t stop now!” kept me reading.

“An anonymous surgeon wrote of his own afflictions with the disease: ‘It rotted all my gums, which gave out a black and putrid blood. My thighs and lower legs were black and gangrenous, and I was forced to use my knife each day to cut into my flesh in order to release this black and foul blood…And the unfortunate thing –‘”

Granted the tension had build up over the last few sentences. And maybe my proclivity to reading aloud infused this (for my children) with a bit more dramatic flair than you get simply reading the words, but —

” ‘And the unfortunate thing [I continued reading aloud] was that I could not eat, desiring more to swallow than to chew.’

In the final stages, the patients’ gums swell up so much that cannot eat. Internal bleeding leads to death.”

So now you know.

And, and the unfortunate thing has become a byline in our home, terrific for either getting a random laugh or balancing heavy stuff.

This is why I read “grown-up” stuff to my kids. Not because “kid stuff” isn’t full of great moments (we’ve read those too), but because all reading creates connections, shared experiences, between those who’ve listened together. And yeah, it’s gross, but it’s also distant enough that it’s not traumatizing, and they won’t be nearly-40 before they learn that Britain basically became a world power because they were the first of the European powers who figured out how to keep their sailors alive.

World events hinge on so. many. things. I was never taught. I’m trying to do better by my kids.

Anyway, here’s my review of Randomistas: 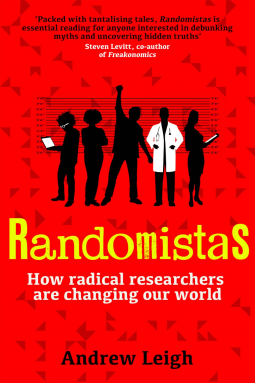 This book was an incredible survey of a huge amount of material. The process of organizing it must have been a nightmare. That said, the unifying ideas and themes of each chapter are designed to help readers assimilate this pile of information, and I think it largely succeeds.

In short, Randomistas is a book in favor of randomized studies as a path to provable truth or understanding the way things (and people) work in the real world.

Randomistas uses both historical and modern examples, responding to potential objections where they naturally arise in the text. (It’s possible this could be a distraction to a reader who’s already convinced of the value of randomized trials, and there is a risk that the explanations in the midst of other, existing organizational topics (as each chapter tries to be) becomes yet another layer of complexity and shifting focus.)

Which is a sassy way of saying some treatments of the various topics felt like long parentheses inside of parentheses. It appeared to be an organizational choice, and I wondered if it was in response to the type of reader who wouldn’t stick around long enough to get to the chapter on (say) ethics, and instead drop the book and miss out. Miss out on having their objections addressed, I mean. Leigh spends a lot of time reassuring the reader this can be an ethical and extremely effective methodology.

Most people reading this will be familiar with the phrase, “There’s three kinds of falsehoods: lies, damn lies, and statistics.” In contrast, Leigh writes, “Sure, it’s possible to lie with statistics – but it’s even easier to lie without them.”

And with the level of detail Leigh goes into – explaining how trials are set up, work, and are reported on – a diligent observer has a way in which they can dig into the solidity of any well-founded claim.

For my part, I did not feel the same weight of ethical quandary in every scenario, and I appreciated Leigh’s effort to portray critics’ concerns without belittling them.

This book is well-written. The illustrating stories and examples clarified the author’s points, and the energy was kept consistently high through the use of surprise and a good balance of (to me) both familiar and new studies. The inclusion of applications was also eye-opening, planting new ideas I hadn’t thought of before. (“Particularly in areas wracked by ethnic conflict, researchers now think that election debates [modeling a verbal, political, disagreement in public] may be a vital tool in encouraging a culture of disagreement over important issues without resorting to violence.”)

Before ending the book, Leigh acknowledges the method’s limitations, and the rarity of dramatic discoveries, but he also lines out the way in which “anyone” could run a good randomized trial. It’s clear he believes in this tool, and by the time I was done reading his book, I did to.

I think that’s the biggest compliment I can give the book, and him.

(I received a free electronic copy of this book, but it did not shape the content of this review.)