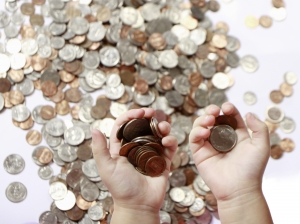 In contrast to the popular saying,

there is this study that shows a fairly tight correlation between money and a lot of good things. (Here’s another eye-opening view, if you go in prepared for anger and crass language.)

I liked reading about this study when it came out, because I’d always thought along the lines that money has got to simplify a LOT of things and how most of the “simple freebies” that are cozy and fuzzy-edged in any story aren’t so accessible.

I mean, I do those things, and they’re not necessarily cheap and accessible.

Free is really less common than storytelling will admit.

It is this common sense awareness of increased money = improved life that gets us into trouble.

When we see, Oh, more money is better life, we don’t see that topping out– until it does.

This is why you don’t see movies about poor people realizing their two jobs plus night school are eating away at their family life and just. not. worth it.

It’s the rich executive or the workaholic mom who have to choose family over acquiring even-greater wealth.

All that to say that we educated types have the same relationship with information.

Many of us have encountered that *Critical Piece of Information* (CPI) at a moment that allowed it to affect the path of our lives.  We know the power of information.

We see the pain of not having the right truth when it would have been most useful.

What a lot of us don’t learn until we reach the brink of crazy (in my case, Depression), or some other break-even place, is that your experience thus far (with more information meaning better life) is not indicative of a continuing curve.

We all hear Money can’t buy happiness (whether or not we buy the assertion), but I don’t think enough of us hear, More knowledge isn’t the solution to every problem.

I have had numerous instances where finding that CPI flipped a switch.  It trained me to believe it was normal to have those discoveries. Perfectly timed CPIs conditioned me to think that anything wrong was an educational deficiency, and I would go so far as to say that most of our culture (and certainly a high percentage of our governmental programs) are based on this same assumption.

It is not a bad a assumption. It is not completely inaccurate

But I will personally testify this misplaced expectation is a bona fide crazy-maker.

One of my favorite bits of G.K Chesterton’s Orthodoxy is when he’s contrasting the “poet” and the “logician,” defending the former from the spurious claim that poets are mad (crazy) as a matter of course. Practically by definition.

Instead Chesterton insists it is the logician who is more likely to go crazy:

It is the logician who seeks to get the heavens into his head. And it is his head that splits.

There won’t always be that single key that will flip a switch or unsnarl the gordian knot of your confusion, or the mess of society at large.

Some things are just too complicated for that. And, really, there are some things that take time.

Here’s an example I heard once.

Suppose you want to grow the World’s Greatest Plant (I don’t know why, but let’s suppose you did.)

Put all these things together and will you have the World’s Greatest Plant?

Because you still. need. time.

Most of us know better than to expect instant growth when we’re talking about crops, but the attitude is still there for potty-training and depression.

I learned the informational nugget this week that the average adult goes through four bouts of depression in his or her lifetime, usually precipitated by some sort of overload that forces their capacities into minimum-maintenance mode (aka depression) while the body attempts to rebuild the system.

I found this idea incredibly helpful.

It gave context to my suffering, validated all sorts of implications, and reenforced that there is no switch to flip.

But if history is any indication, I can do it eventually.

There is no one thing that will turn off anyone’s depression, so maybe one of the “helping” decisions is to rest your mind. Facilitate that urgency and need to rebuild.

I mean, you know, since figuring all this out won’t make things better anyway…

But I did have to know, first, that was true.