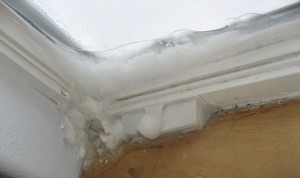 That was solid frost on the left corner, but I broke the hole there in getting the curtain loose for the picture.

I agree with whoever it was that said “People who complain about the cold are really just bragging they survived it.”

And as part of my brag I wanted to point out the ways in which this cold snap (that may be record-making– I’ll know in a week or two) really isn’t as horrible as it could be.

One thought on “Cold Positives”