Here’s one I haven’t seen before that illustrates a bit of Sol Stein’s “suspense technique” that I alluded to in my last post.

I know it didn’t originate there, but it sound’s better than “Go read Redwall.” which you can still do if you want to see this technique used with mathematical precision.

The simple summary is that you want to keep your reader tense.  The way you do this is by not answering the questions as soon as they arise; you create a question an then take a walk with someone else getting in trouble before you go back.

Here is my chart: 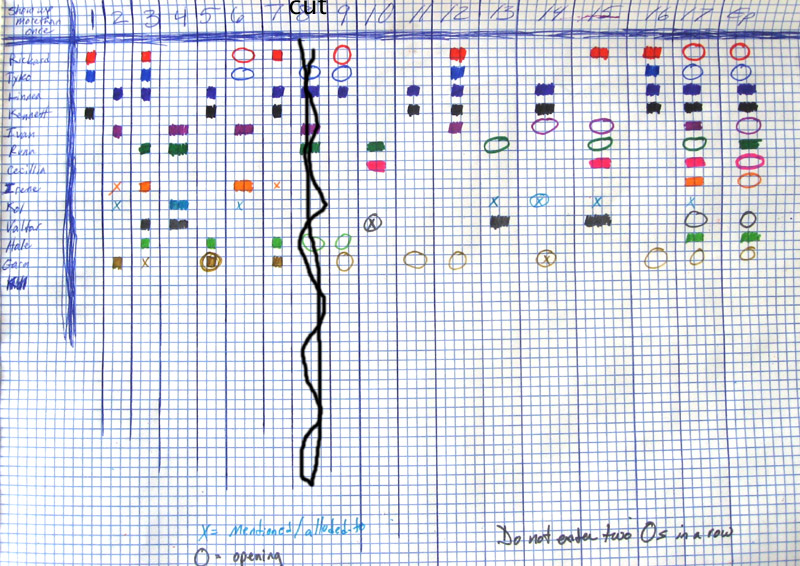 Cutting edge, I know.  Moving on.

What you see here is my effort to visually represent the pattern of each returning character’s appearances (by chapter).

That is, any characters appearing only once (my crowded Inn in Chapter 3: Old Friends and Others is a great example.  Characters that don’t come back until a later installation) don’t make this list.

You can see my main character in the third row, and I was pleased to see my section-working has her plot advancing just about every-other chapter.  This was my goal.

In the case where she appears in two chapters in a row (e.g., 2 to 3) I changed the POV (point of view) so that the interaction still feels different.  We’re not in her head the next time we see her, so we still have the lingering question of how she recovered from the events of Chapter 2, and new information that we wouldn’t have seen from her POV: that her face is bruised.

This chart helped me in several ways.

This last is (currently) the most useful, not the least because of I’m at an early stage in this draft.

When I made my first version of this chart (While I snuggled my kids watching The Hephalump Movie) I realized that Ivan– the purple in the middle– disappeared after chapter 8 and reappeared at the denouement to produce the Perfect-Thing for the rest of the story.

I hate it when I read stuff like that, so I had to go back and look for other places to lay the foundation for that same act.  Those are the empty circles I added.

The bottom color, Garm, needed to be added to almost every chapter Linnea (MC) is in because he’s her dog, and it’s a sort of plot-point that he’s always around.  I had forgotten this as I went along.

I still have to decide how present her son (second from the bottom, light-green) is.  There are some places he’s necessary and some places he just can’t be.

So, there it is, for what it’s worth.  Very helpful exercise for me; maybe to someone else too.